gallery Get Congress To Revive the Delaney Clause!

What is the Delaney Clause? The Law that banned carcinogens in the Food Supply!

Once upon a time, our country took measures to protect public health. Sound like a fantasy? Well it wasn’t. From 1958 to 1996 the food supply was protected from carcinogenic substances–anything deemed to cause cancer to humans or animals was forbidden.

Because of the efforts of James Delaney, in 1958 the Delaney Clause was attached to the Federal Food, Drug and Cosmetic Act. They want to resist GMO labeling, how about we get Carcinogen Labeling instead? 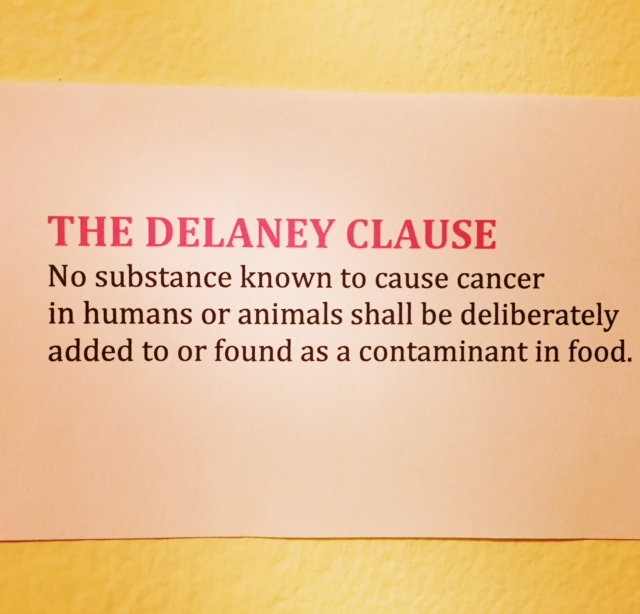 If you’re interested in bringing this law back to protect public health, please visit my petition site and SIGN YOUR NAME:)

Up until 1996, carcinogenic substances were banned from the Food Supply. This included any food additives believed to cause cancer to people or animals.  The provision, called the Delaney Clause was attached to the Federal Food, Drugs and Cosmetic Act of 1958. Through the efforts of New York Congressman James Delaney, industry and food manufacturers were prevented from adding dangerous, toxic ingredients or chemicals to foods and thus the public was protected from chemicals or substances known to cause cancer.  As a result we had a food supply that we could trust.

Unfortunately in 1996 with the signing of the Food Quality Protection Act, the Delaney Clause disappeared. It’s time to bring back this clause, restore the integrity of our food supply, and protect public health to the fullest extent possible. Reducing exposure to carcinogenic substances, be it in food or any other medium is one of the most powerful ways we can reduce our risk of developing cancer. Perhaps by reducing exposure to carcinogens we can help one person, maybe more, live a cancer free life.

In tribute to Donella Meadows* who wrote so eloquently on this issue, let us all unite in bringing back Delaney!

Thank you for signing and supporting this petition🙂

Welcome to the Wecologist, your source for health & environmental intel. If you have health concerns, chances are they're linked to environmental conditions found within our air, water, and food supply. These conditions affect all people, animals, and ecosystems around the world. Exactly how much environmental health is intertwined with our daily lives cannot be overstated. Get the facts and information you need now to help improve your life and those you love.